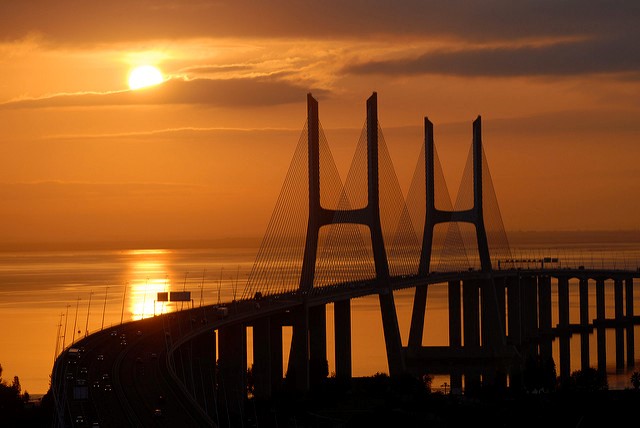 Lisbon has been considered one of the hottest places to visit over the last few years and this is also true for 2017. While most savvy travellers have been to such European cities as London, Paris, Rome, and Barcelona, Lisbon has still remained somewhat an unspoiled and off-the-beaten-path destination. As one of Europe’s oldest and most charismatic capitals, Lisbon is a colourful city in every aspect. Since it’s built over seven hills, it will in many ways remind you of cities like San Francisco, Istanbul or Rome. But Lisbon certainly has many unique characteristics to it that are unlike in any other city in Europe. And though there are at least a hundred reasons to visit this Lisbon, we have narrowed them down to Top 4 reasons to love this fascinating European capital. Light is all-important to creating a masterpiece, say artists. Also known as the ‘City of Light’, Lisbon charms with its beautiful blue skies, long hours of summer sunshine and sunsets that will take your breath away.

There are not many cities in the world that have a climate as steady and comfortable as Lisbon does. There is plenty of sunshine throughout the year, making it a great choice for visits all year round. In fact, Lisbon is the capital with the most sunny days in all of Europe with an average of 2799 hours of sunshine a year. The so-called ‘rainy season’ comprises of just a few months of incidental rainfall in the winter. It’s Portugal, but roaming the streets of this exciting capital one cannot miss the traces visible hinting of both African and Brazilian heritage. The colourful streets, pastel buildings, music playing on the streets and locals sipping a glass of afternoon port are the things that make Lisbon unique.

Lisbon is truly a city of contrasts, a place where tradition meets trendiness – you’ll find world-class museums, hip boutiques, ancient landmarks, and quirky street art. Whether your interests lean towards admiring the impressive UNESCO World Heritage Sites or dancing the night away amidst the city’s string of hip bars and nightclubs, Lisbon will not disappoint.

3. It’s suitable for all budgets

Adding to Lisbon’s image as the city of contrasts, you’ll be glad to hear that it is also incredibly easy to find accommodation to suit all budgets. You can discover both a good selection of decent hostels as well as some fantastic luxury hotels. The best thing is, Lisbon is one of the most affordable capitals in Western Europe so you won’t have to spend a fortune to bunk in style. For example, the fabulous five-star Corinthia Hotel Lisbon recently launched a 50% off sale on all its best rate rooms. This means that you can book a night at one of the most luxurious and exclusive hotels in the city for a mere €80 per room per night. If that sounds as good to you as it did to us, we suggest you head over to their website as the offer ends on 28th February 2017. Read more about the Corinthia Hotels’ Annual Sale here. Beyond Lisbon, lies a full range of destinations perfectly suited for a day trip. In fact, some of the most impressive locations in Portugal can be reached only within an hour of Lisbon, either by car, bus or train. Lisbon is surrounded by ancient castles, grand palaces and other historic landmarks – all waiting to be discovered.

The nature of the nearby destinations is beautifully vibrant and unspoiled – you can explore the plentiful nature reserves and rivers either by foot or by boat. Along the coast, you’ll find sleepy fishing villages and some of the finest sandy beaches in Europe.

Having been somewhat of a forgotten gem in the past, Lisbon has truly flourished in recent years and today people from all corners of the world make their way to explore this astonishing capital. Aside from the fact that it’s one of the most affordable capital cities in Europe, what will make your visit a memorable one is its perfect mixture of sunshine, fascinating culture, luxury hotels, sandy beaches and a hip city vibe.

It’s a combination of all the above-mentioned qualities that made us fall in love with Lisbon and we’ve got a feeling that you might fall in love too.