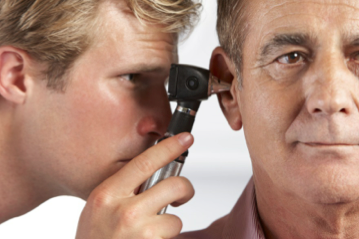 There are things in life that we categorized as irreversible — losing a limb, donating an organ, suffering from hearing loss. We aren’t able to regrow arms or legs, and if we’ve donated an organ, a new one won’t regenerate in our bodies. But, studies are now showing that hearing loss might be something that can be restored, and that’s significant news considering more than 50 percent of American in their 50s or older have some degree of hearing loss. So, while causes of hearing loss are varied — from genetic to living in excessively loud environments to disease — the ability to reverse hearing loss might be just as diverse.

Every year, about 12 million people, or 1 in 20 adults, visit the doctor to have earwax removed. While a person can still hear with an ear canal that is 95 to 97 percent blocked, if water gets into the canal, it can cause the wax to swell, resulting in almost immediate hearing loss.

Doctors do not recommend trying to remove the wax on your own with a cotton swab as you may push the wax deeper into the ear canal and cause an impaction. For safe, at-home removal, soak a cotton ball in a solution of equal parts white vinegar and alcohol, tip your head up, gently dab the ear, and then tilt it back down to drain.

See Your Doctor About an Undiagnosed Allergy

If your sinuses become blocked, you could lose your hearing. This type of blockage can result from colds, sinus infections, or allergies, and result in the Eustachian tube — the channel responsible for regulating ear pressure — swelling shut and sucking fluid into the ear space. If you’ve never been diagnosed with allergies, but seem to have a persistent cold, visit your doctor. An undiagnosed allergy could prevent your ears from clearing, leaving them chronically blocked, resulting in persistent hearing loss.

Reduce NSAIDs and Other Drugs

High doses of NSAIDs such as ibuprofen (800 mg, three times a day) or aspirin (more than 10 a day) can cause tinnitus or a constant ringing in the ears.

If you notice ringing in your ears after starting these medications, consult with your doctor about switching to acetaminophen, which doesn’t affect ears. After stopping the NSAIDS, tinnitus almost always stops.

Increase ALC and ALA

Researchers have discovered that antioxidants ALC (acetyl-L-carnitine) and ALA (alpha-lipoic acid) can not only prevent typical hearing deterioration that results from age but can result in improved hearing. During their study, the control group lost between from 3 to 7 dB of hearing, while those treated with ALC or ALA had a 7 to 10 dB improvement in their hearing after six months of treatment. It was found that ALA was more effective for protecting hearing at low frequencies, while ALC did better at higher frequencies.

By following a low-calorie, high-nutrient diet, you might not only improve your waistline but also benefit your brain and, thus, your hearing. Swedish researchers followed 300 women over 24 years. By collecting various data from physical exams and brain scans, they found evidence that those with a high body mass index (BMI) throughout adult life had lost brain tissue when compared to those with lower BMIs. Loss of brain tissue occurred in the temporal lobe, which is home to the auditory system as well as language, speech, memory, and comprehension.

Researchers from Great Britain have also found a link between excess weight and accelerated aging. In their study with more than 1,100 women, scientists found that obesity increases free radical levels in the body, which are believed to increase the signs of aging. Therefore, by maintaining a healthy weight or by losing weight to reach a healthy BMI, you’ll not only help your body, but your brain and auditory system will benefit as well.

If you begin to notice hearing loss, make an appointment with a professional. But, keep in mind, that with a lifestyle change or simple procedure, you might be able to reverse and restore your hearing.